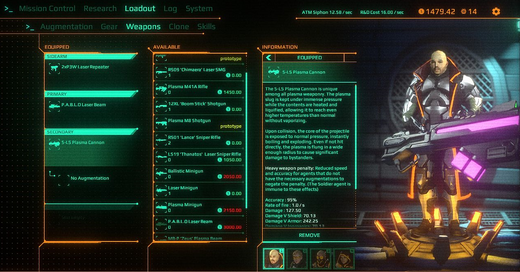 Weapons provide the firepower needed to get to and take down targets. There are 25 weapons using either Ballistics, Lasers or Plasma.

All weapons are ranged and make attacks against a target of the players choosing. Weapons have different damage stats depending on what is receiving damage. Weapon prototypes are often rewards for [!] Missions. Initially, they can be used, but not reproduced. They must be

Games will start with access to the UZ1-MP SMG and the Lincoln P97 Pistol. The Soldier, Support, and Hacker will have these equipped. The Infiltrator will be equipped with the Pistol and RS01 Lance Sniper Rifle, but it cannot be purchased until it has been researched.

Agents start with one Primary and one Sidearm weapon slot. Agents can get another primary slot with the Wetcorp: Weapon Slot Augmentation and the Soldier can gain an additional slot by taking the 4th rank in

To use weapons, the player must first select the agents desired, press either Space Bar or click on the icon over the agent's portrait to ready the weapon, and finally select a target. Any valid target will have a red crosshair appear over it while the cursor is hovering over or it while any agent with a weapon out is selected. The player may also force the agents to fire at the cursor location by pressing Ctrl+left click. Players can change an agent's readied weapon by clicking the ribbon next to the displayed weapon next to the agent's portrait and selecting a weapon from the drop-down list. Clicking on the desired weapon will change the readied weapon and the agent will pull it out immediately.

Reloading is automatic and sometimes sporadic.

Having a weapon out in any area, including public areas, is suspicious at a minimum. Any drone or camera that sees an agent holding a weapon will begin to identify and

Report the agent. Any guard that catches an agent holding a weapon out will attempt to detain them. The guard(s) will fire on anyone that resists. Agents holding a weapon in the Check Point zones will be fired upon and

All agents start out at a beacon with full ammo, as indicated by a solid white bar over the agent's portrait. As ammo is used, the bar shrinks. Ammo left in the magazine is shown as X. Ammo can be restored by standing next to a

Relay Beacon, an Ammo Crate, or taking ammo from an Ammo Pack. Fallen security forces (including drones) also drop small ammo boxes, that refill some of an agent's ammo if they walk up to it. Characters that are gathering ammo have a blue hue and small images of bullets floating around them. The Ammo Vest will increase the how much ammo an agent can carry.

Any agent can perform an Assassination with any weapon against any human target. An assassination is performed by selecting an agent and pressing Alt+left click on the target. A valid target will have a red crosshair with a silhouette of a head when hovering the cursor over the target. The agent must not be in the line of sight of the target, but the target may be aware of the agent and even looking for them. All inorganic targets are not valid targets.

Sidearms are always the first weapon slot. Each agent can have one.

Wielding Heavy Weapons come with a penalty. With the exception of the Soldier, the wielding agent will be slower and less accurate than normal unless they are equipped with the Arm Nanofibre Muscle V1 or V2 for accuracy and the Leg Nanofibre Muscle V1 or V2 for speed. The unalterable drawbacks to heavy weapons are the power-up times, the lack of flexibility in their use, and the significant collateral damage. Heavy Weapons use the same slots as Primary Weapons.

Weapon Augs are used to increase a particular stat, or grant a new ability. Most are made for a specific weapon type. Weapons can only have one augment each.

Community content is available under CC BY-NC-SA 3.0 unless otherwise noted.