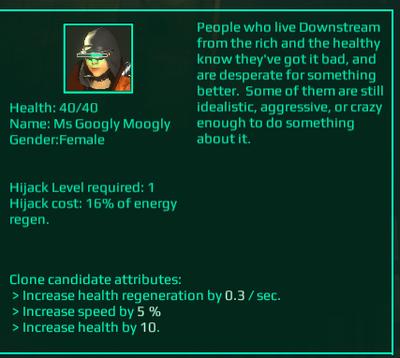 Every Agent is a Clone. A player can acquire more bodies by

Hijacking other characters and sending them to be cloned. Clone options are accessed under "Loadout"

Death is permanent for the body, sort of. If killed, an agent's consciousness will be automatically downloaded for implantation in a newly cloned body that is deposited at a

Relay Beacon. This newly cloned body will degrade each time it is remade. Repeated respawns with the same clone will eventually wear the body down. Acquiring new bodies for cloning will be needed to maintain a strong Agent.

These bodies can provide the agents with stat bonuses including:

A player can use the Hacker's skill

Hijack to capture an eligible character and send it for cloning by selecting the option next to the character's profile.

World Scan with the target in range. There is a price for gaining the information starting at $50; this decreases by upgrading the skill. The information cannot be purchased until a facial scan (a set of symbols flickering over their faces) is complete.

In general, stronger characters will have better stats and be harder to hijack. Very few characters are not eligible for hijacking. Civilians are the easiest to hijack and have the weakest stats, while enemies will vary depending on the enemy type. There is also some random variation between characters of the same type. Two civilians will not always have identical stats, for example.

Once a character is sent for cloning, the player can access the new body in their game menus. Here, they will select the agent they would like to alter and then select the body they would like to change to. The stats that will be altered will appear in parenthesis; improvements will be green and reductions in red.

Weaker clones may become valuable when a current clones' stats degrade after an agent is killed and respawned many times.